Rum Sodomy and the Crash 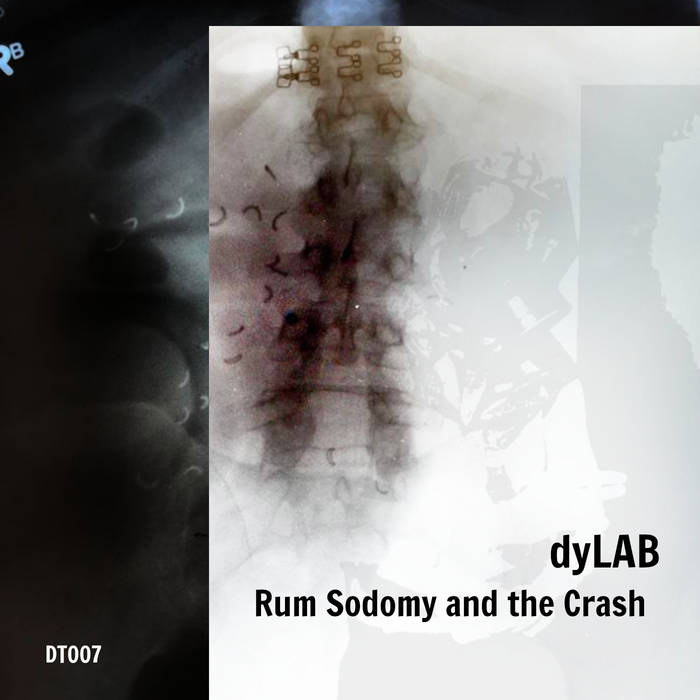 Revolt of the Apes

We over here at Degenerate Trifecta are very excited to have in our possession some of Melbourne's finest acid. Proprietor of fine acid mayhem, dyLAB joins the DT crew with a banging quad dose EP, taking you to the edge of darkness and beyond. Be careful out there.

"The beats maintains even in the slower times and it feels like this movie I've seen but can't quite put my finger on. Maybe it was an experience I once lived, but it's somewhere between dance party and nightmare, rave and feverdream. "Blood, Death and Fires" seems to be particularly big on the claps and it's not the easiest thing to explain why but I always feel like this music is taking me somewhere.

Lighter, Pong-like beats begin "Lambs at the Slaughter" now and I enjoy that while this has that overall electronic sound to it there are also these layers which make it feel like so much more. It's not just this straight forward dance music. Yes, you can dance to it, but there is a bit more going on within these songs that really help it to stand out from other songs you may think this sounds like.

By the final song, "A Forgotten War", there are these beeps and tones which just feel like they're coming through from computers while the beats continue to move you and there are what sound like vocals in the background of this as well. On one hand, you could listen to this CD (digitally if you don't still have a Discman) while exercising. Typically I think of exercising as going outside and walking or running but I suppose you could listen to the CD from the comfort of your home.

But in a lot of ways, I think of this as more of a book, each song telling a story and getting to the end doesn't mean your workout is over but rather it provides a different sense of closure. Being able to be so emersed, so deeply into this music- or any music which is instrumental for that matter- is a reason above all for you to at least listen to this once to see if you will share a similar experience. If you do happen to stumble and fall on that same wavelength as me, the journey will have certainly been worth it." - raisedbygypsies.blogspot.com/2018/12/cd-review-dylab-rum-sodomy-and-crash.html

"With a title like Rum Sodomy, I was expecting this to be rather destructive to my bowels but I was sadly disappointed." - yeahiknowitsucks.wordpress.com/2019/04/02/returns-it-does-ha-ha-ha-osr/

"Lost in a Sea of Sound is not an expert on Acid Music. More accurately, poorly knowledgeable is a better validation.... When the time arrives to describe this new release from dyLAB, there is some trepidation. Describing sounds is always difficult and this genre is part of that process.

Acid/Techno music have been around for a long time and dyLAB has been creating sounds for a very good part it. Check out his bandcamp page, the first release under the dyLAB name was from ten years ago. On this newest release titled Rum Sodomy and the Crash, four heavy tracks are divided in just under a half hour. With a few repeated listens to this composition, dyLAB slowly drills the metal sheeting on the consciousness. The revolutions per second or beats per minute held seamlessly steady. There is no grand build up for each track. Just continued beats, augmented by hypnotic electronics. These sounds oscillate above the continual percussive canvas and vary in angular degrees between each track. A fully developed experience for those who can handle the minds deep crevices.

Rum Sodomy and the Crash is a spoofy title on another popular album there is no need to go into. Not sure where the connection is, maybe a melodic structure that carried over. Never listened to the referred to Pogues lp so can not make that analysis.

Released on the label Degenerate Trifecta out of Washington State. This compact disc is in an edition of twenty five with only six remaining. dyLab is from Melbourne, Australia. He has a radio show on Seance Radio every Sunday night at 11pm GMT." - lostseasound.blogspot.com/2019/01/dylab-rum-sodomy-and-crash.html